By Kevin KrajewskiJanuary 7, 2019Uncategorized
No Comments

Why are electricity rates in Texas high right now?

This chart shows actual energy rates for North Texas over the past 3 years.

What’s the reason electricity rates are higher in 2019? There are  four main factors among others that affect our Texas Electricity Rates: 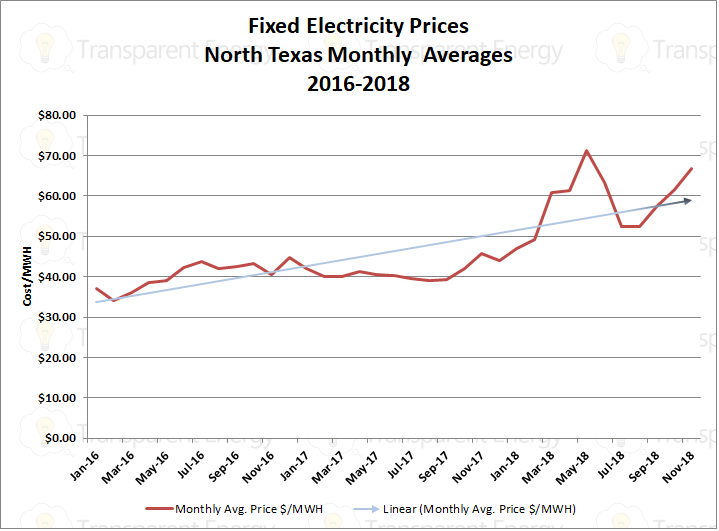 The first factor, Supply, was dramatically affected recently when 3 coal plants shut down that made up almost 5% of Texas’ steady fixed generation that was available to buy into the future. We say steady because not all future generation is certain. Wind and solar are not as reliable to fix rates by into the future because their output is dependent on weather conditions. So having power plants shut down that provided solid fix generation makes the fixed future price of electricity go up. Those Autumn 2017 closures caused ramifications that carried over into the spike you see in 2018 on this graph.

Thirdly, Weather  is predicted seasonally by the federal government’s Seasonal Outlook. If a warm summer or a cold winter is predicted, futures prices usually go up a bit.

Fourthy, the Texas wide ERCOT system publishes a Seasonal Assessment of Resource Adequacy (SARA). The report gives predictions that weigh heavy on the speculations for the future and typically will raise or lower electricity prices. The March 2018 report predicted a large Demand for the summer of 2018 which caused most of the fixed generation to be bought up by June 2018! Electricity providers were saying about the high rates “supply is just really short right now.”

The market dip in August was thought by many to end the higher priced season of 2018, but we have still had shorter supply for the past several months. Even though this Winter’s SARA shows no bullish signs, the market has not gone back to offering of 4 cent rates. Rather average rates are now around 5-6 cents.

Can we predict where the rates will go over the next few months? No, and we shouldn’t make bold assertions. But we will say that the 4 indicators do show low supply, high demand, and a good deal of bullish speculation for Summer 2019. So it is looking like the market will stay up for a while.  If this year turns out to be like 2018, then electricity rates would go up and up until the middle of summer. In that case January and February may be the best months to fix your 2019 rate.

Many people do not know that buying today’s electricity instead of long term fixed rates is  an available option! There is actually a whole different kind energy price that is not fixed, but follows more along the lines of how we buy gasoline at the pump. You actually can pay for today’s electricity at today’s rate! These are rates called index plans or wholesale plans. Wholesale Index Plans simply pass through whatever today’s wholesale rate is and include a typically small fee to pay the provider. The provider fee (also called an “adder”) is to cover the cost for them to send you a bill, provide customer service, and manage your account in ERCOT.  Wholesale index plans have been the lowest priced plans since the beginning of deregulation in Texas! Occasionally, they do rise above a fixed rate but the per year average spent on electricity has remained consistently less than fixed rates. Don’t believe it? See our chart below of actual prices for the past 6 years! We highly recommend index rates in days of Uncertain fixed-price markets if you can afford an occasional price spike.

Message from our founder

“Our advisory and quotes are provided at no charge with no obligation. While others may lure you into exclusivity, we strive to be the utmost safe place for our clients. With kindness as our vision, you can expect an outstanding return on your investment of the few minutes it takes to give us the information we need to find you savings.”